The Ferdowsi Research Laboratory at the University of Houston uses a combination of laboratory and numerical experiments, theoretical and analytical studies, to better understand and more quantitatively predict the flow and deformation (the scientific field of rheology) of earth materials in initial, loading and boundary conditions relevant to earth's near-surface processes. A major focus of the group currently is on the behavior of granular geomaterials -- and other soft geomaterials, complex fluids, and disordered solids that share some similarity in their structural properties and dynamical behavior with granular materials -- in dry, fluid-driven, saturated, and unsaturated conditions. For numerical experiments, we use and collaborate to further develop, Discrete Element Method (DEM), DEM coupled to Computational Fluid Dynamics (CFD) method, DEM coupled to Finite Element Method (FEM) method, and Boundary Element Method (BEM). For laboratory experiments, we collaborate with classical rock and sediment friction and mechanics laboratories; we are also equipped with an advanced rheometery laboratory which is capable of performing steady-state and transient rheology experiments on soft geometerials, granular materials, and complex fluids. We seek collaborations with field-going scientists, and are excited for working across the disciplinary interfaces with geophysicists, geologists, engineers, applied mathematicians, computational scientists, social scientists, environmental policy researchers and scientists.

The lab is based in the Department of Civil and Environmental Engineering at the University of Houston. It is equipped with an Anton Paar Modular Compact MCR 702e Space MultiDrive rheometer (with additional accessories that include pressure cell, temperature control device, several loading geometries for each rheometer configurations, as well as an accelorometer) and a granular materials (particle) shape and size analyzer. We also have a dedicated computational cluster maintained by the Hewlett Packard Enterprise Data Science Institute (HPE DSI) at the University of Houston. 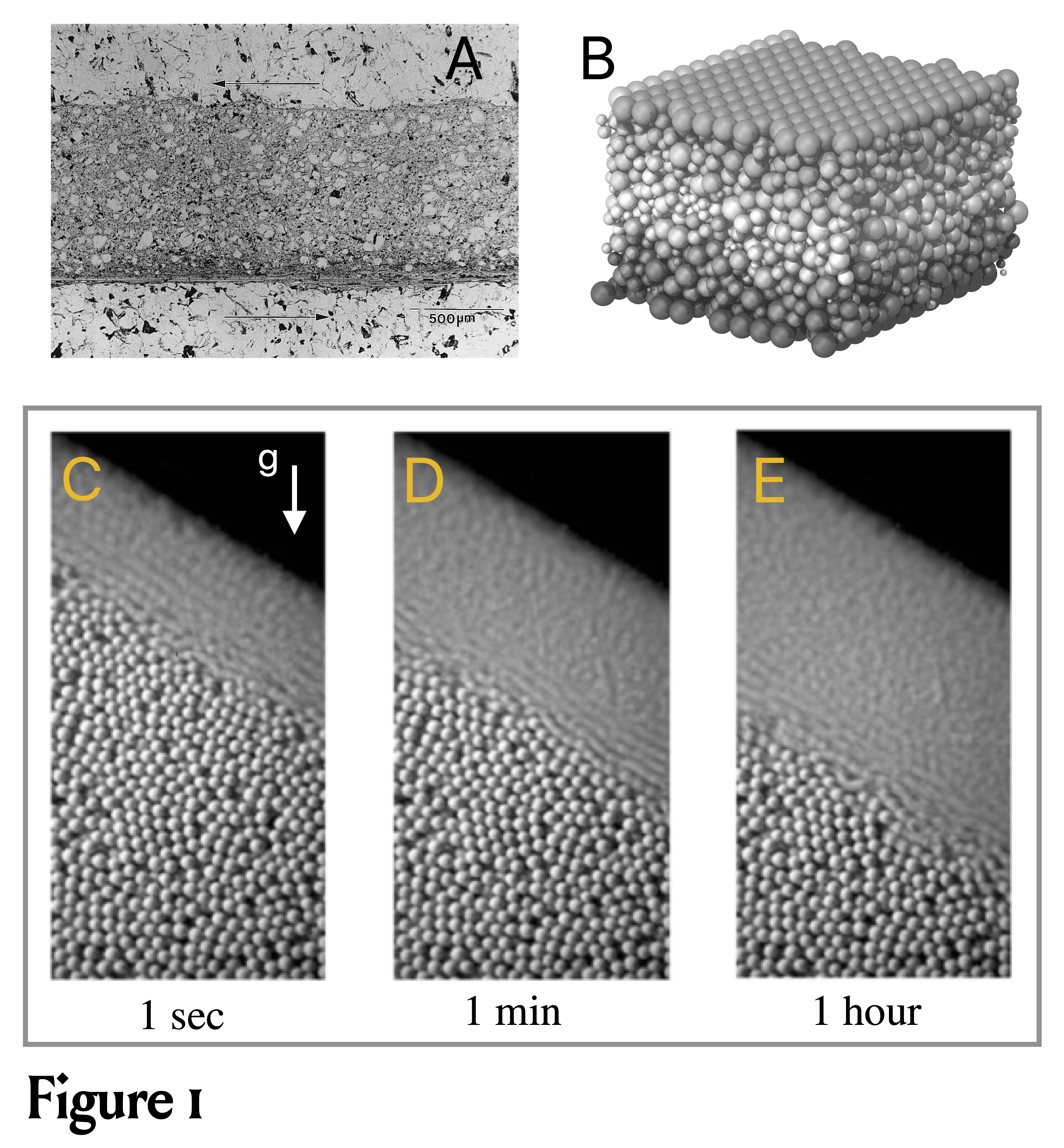 Figure 1 illustrates some examples of granular materials and systems we study in numerical and laboratory experiments. Panel (A) shows the powdered materials produced due to wear of the two pieces of rock that are sheared across each other. This is an image from Professor Terry Tullis's experimental rock friction laboratory in the Department of earth, Environmental and Planetary Sciences at Brown University. This powdered material is called the fault gouge in the earthquake and rock physics communities (Image is modified after Scruggs & Tullis, Tectonophysics, 1998). Panel (B) shows snapshot of a sample of sheared granular material realized in a DEM numerical experiment (Ferdowsi & Rubin, Journal of Geophysical Research-Solid Earth, 2020). Image sequences (C)-(E) illustrate two styles of flow (slow creeping motion well below the surface and faster dense flow close to the surface) of granular materials in sandpile experiments performed by Komatsu et al., 2001 (Image is modified after Komatsu et al., Physical Review Letters, 2001).

So, why do we study flow and deformation of earth materials? I (Behrooz) has a few main reasons that I will explain here. As the laboratory grows these motivations will be updated based on the interests and with collaboration of other members of the lab. For the first reason, I have been intensely curious1 about various aspects of the behavior of earth materials that are granular or those that have a disordered and granular-like structure (and a wide variety of materials on the earth's surface and near-surface belong to this category). My second reason is derived from this first reason: it turns out we still know very little about various important aspects (structural and dynamical) of the behavior of granular materials2. My research and those of other scientists and engineers in our field show that an improved understanding of the behavior of granular materials is essential for developing physics-based models3 for many types of earth materials with a fragmented, granular, or disordered structure; and we need physics-based models for developing reliable (as much as possible, within the limits of knowledge, computational resources, and observational data at a time) forecasts for geological processes and hazards. As an example, my most recent work with Allan M. Rubin, my postdoctoral advisor in the Department of Geosciences at Princeton University, suggests that a transient frictional response that many geomaterials show, and is known as the rate- and state-dependent friction [Dieterich & Kilgore, PNAS, 1996; Marone, Annu. Rev. Earth Planet. Sci, 1998]4, can be a granular physics phenomenon. This transient response is key to the initiation of almost all geological instabilities and natural hazards with a frictional origin, such as landslides and earthflows, sliding of glaciers, nucleation of icequakes and earthquakes, and volcanic caldera collapse events. Further, we currently have no other physics-based model that can explain this transient response in the important details and with features observed in laboratories (i.e., consistent with empirical observations), at least for rock shear zones. As a result, improving our predictive capabilities for geohazards and geoprocesses has emerged as a new motivation for our research in recent years, a motivation that also has broad societal relevance and implications, because what we will find during the course of our work can potentially improve how we forecast natural hazards and how we try to probabilistically predict the changes of the earth's near-surface, their associated impacts and risks.

We are also broadly interested in further understanding the physics and chemistry of the processes that shape and change the earth's surface in short (~human life) and long (geological) timescales. These include the physics of sediment transport, sediment erosion and deposition processes, soil production and transport. These processes are also not very far from granular physics, because most soils at some length-scales are made of grains, and sediment transport is a hydrogranular process.

This description is to be completed with links and information to some of our past and ongoing research projects and findings. At the moment, you can check the laboratory's Publication page. Please also feel free to reach out to Behrooz directly via email if you are interested in discussing about any of these research areas, if you are a student looking for research opportunities, or if you are a PI interested in potential collaborations.


Panels (A-D) show example geological hazards and processes where transient frictional response (rate- and state-dependent friction) of a localized shear zone plays a crucial role (in most cases, it fully controls) in the onset of sliding and the mode of an instability. Panel (A) is an image of the 2005 La Conchita landslide in the town of La Conchita, California (image credit to the US Geological Survey, USGS). In this case, there are increasing evidences that the initial frictional instability that get the landslide going takes place in the basal shear zone (which often is a rather narrow layer where deformation is localized, and it is filled with fragmented rocks and soils of all types; there is also an interplay between changes and effect of humidity and fluid transport with the "solid" materials phase in the shear zone) of the slide. Panel B shows the San Andreas Fault in San Luis Obispo County in California (image credit Tom Bean, CORBIS). Earthquakes initiate by the initial frictional instability within the fault gouge, such as the one shown in Fig. 1A (albeit, the fault gouge of Fig. 1A is formed in an experiment). Panel (C) shows the formation of subglacial debris (basal till) that has melted out from the dark striped basal ice layer (Photo credit M. J. Hambrey, 1987; https://www.swisseduc.ch). The transient friction of the basal till (powdered rocks and sediments) controls the speed and mode of sliding of the glaciers. Panel (D) is an aerial photograph of the Kilauea Volcano's summit on June 12, 2018, after the onset of the caldera collapse (image credit: Kyle Anderson U.S. Geological Survey; see this Scientific American article for more information). A recent paper by Segall and Anderson provides strong evidence that the collapse event was controlled by the frictional instability of a shear zone in the caldera structure, and that the frictional ("rate-and-state") parameters of that shear zone are close to, or at least are meaningful, with regard to laboratory measurements (Segall and Anderson, PNAS, 2021).

Panel (E) is a photo of the Elwha river, a gravel-bedded river in the state of Washington (image credit to the National Oceanic and Atmospheric Administration (NOAA) Fisheries; please also check the link for more information about the influence of gravel sorting and armoring (a granular pheneomnon where larger grains tend to localize around each other) of the riverbed structure on the river habitat. Panels (F) and (G) illustrate the development of convex, rounded hillslopes, and formation of ridge-and-valley topography in a soil-mantled terrain (made of hillslopes and valleys), which Dietrich and Perron argue in their 2006 Nature paper, can be the result of a particular (empirical) form of soil tranport (constitutive) law (photo credit of panel F is to Daniel Hobley; photo credit of panel G is to J. Kirchner, modified from Dietrich & Perron, Nature 2006).

1. This is partially an intuitive curiousity and partially a curiosity encouraged by reading soil mechanics and poromechanics papers of 1930-1970s for research projects during my undergraduate studies.

2. For some evidence, the Noble Prize in Physics 2021 has been awarded in part to Giorgio Parisi for his scientific discoveries related to advancing our fundamental understanding of the behavior of disordered solids, including granular materials.

3. A physics-based model is a model in which we have at least a partial (if not complete, it could be based on empirical observations) understanding of why a certain behavior emerges and certain equations or components are solved/included in the model.

4. The rate- and state-dependent friction is also a general materials science phenomenon [Li et al., Nature, 2011], is not limited to earth materials, and it has been observed for many geological and other material interfaces that are not necessarily granular or even amorphous. Therefore, there could be multiple physical processes at work that produce a rate- and state-dependent-like frictional response. Also, the details and the degree of similarity of the behavior for various material types and interface types are not explored in sufficient details, so I think we also don't know how similar is the transient response of different geological and non-geological materials.

Our frictional healing paper has been accepted for publication in the Journal of Geophysical Research Solid Earth. - November 16, 2021

Our Earthcasting paper has been published in AGU's Earth's Future and has been selected as an Editor's Highlight. - November 7, 2021

Seminar at the Department of Earth, Environmental and Planetary Sciences, Rice University - September 16, 2021